The six-toothed bark beetle, Ips sexdentatus Börner (Coleoptera: Scolytidae) is a very important pest of pine trees. It is mainly distributed in Europe and in Asia. The species more liable to being attacked are the Scots pine (Pinus sylvestris), Maritime pine (P. pinaster) and the Austrian pine (P. nigra).

The adults hibernate inside the galleries. When spring comes, males fly to other trees for colonization. They start boring into the bark and penetrate in the phloem where they build a nuptial chamber to mate with incoming females. Once females are fertilized, they begin to construct longitudinal galleries where the eggs are deposited. Each female may lay up to 60 eggs.  After hatching, larvae feed on the phloem and build new galleries perpendicular to the egg gallery.

Pupation occurs at the end of each larval gallery. When adults reach sexual maturity they bore an exit hole in the bark and search other host trees for mating to start a new generation. This beetle may have from one to five generations per year depending on the climate. In the central part of Eurasia it has two generations and in the Mediterranean region, normally three, but in long and warm summer season areas there may be up to four or five generations per year. Adult are able of flying up to 4 km in search of suitable host trees and they are also subject to wind dispersal. It is considered a secondary pest that usually attacks weakened or dying trees, but when population is important it may attack healthy trees. As a subcortical borer, the construction of galleries paralyzes the sap flow killing the tree. Host trees attacked by this species are characterized by the presence of reddish brown frass on the bark surface. Also the needles of attacked trees turn from green to yellow and reddish-brown color. Furthermore, this species acts as a vector for a blue-stain fungus (Ophiostoma spp.) that also damages the tree.

As preventive control measure it is highly recommended to remove infested trees before the emergence of the new generation of adult beetles. Also the removal of remaining prunings throughout the period adults may be present. To control high density populations it is recommended the use of traps with aggregation peromones. Here, both males and females are attracted and eliminated.

The product IPSPROTECT is a dispenser of pheromone vapors. The active substance used in the product is a blend consisting of the two components ipsdienol and (S)-(+)-cis-verbenol. The first compound has been described as the aggregation pheromone of I. sexdentatus. The second component improves the attractant effect of the pheromone.

The lifetime of the dispenser depends on the temperature, ventilation and ambient humidity. In regular weather conditions the dispenser lasts 60 days. It may be reduced at high temperatures and/or strong winds.

· Each IPSPROTECT has to be placed inside a Theysohn trap at the top of the device.

· Traps should be placed in the forest hung from a convenient support 2 m high.

· It is recommended to place some traps for monitoring in forest clearings (3-4 per clearing) close to sensitive zones (e.g. weakened trees) or with damage in the previous year. These traps will be placed linearly with a distance of 500 m between each other. Traps should never be situated beside or under the pine trees.

· Traps should be installed a few days before the first flight of the adults.

· It is recommended to examine traps regularly in order to check the population level in the area.

· In the areas where the population trapped is high, mass trapping will be used, increasing the number of traps in those locations. In this case, the distance between traps will be reduced to 100 m.

The product IPSPROTECT is supplied in parcels with the convenient number of units. The material of the packaging is impermeable to the vapors of the product.

It is recommended to keep the product in its original packaging, unopened in the freezer until ready to use. Under these confitions the product can be stored for at least two years.

With the usual handling of the product, there is no risk of toxicity on people, animals or plants. The product is a dispenser located inside a trap and emits to the air vapors of the active substance at a low controlled rate. Therefore, risk of water and soil pollution are also discarded.

The dispensers and their packaging have to be managed according to current legislation for residues disposal. 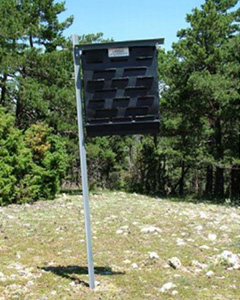